Corrective action plans are a key element of trauma performance improvement (PI). Ideally, the first corrective action plan developed leads to a complete resolution of the PI event. In reality, the initial plan often requires some major revision to achieve the desired outcome.

Corrective action plans are written with good intentions. We believe they will be effective at producing the desired change. But if the change is not occurring, the PI coordinator or trauma program manager needs to review the action plan with a critical eye.

Some corrective action plans lead to rapid improvement but then hit a plateau. Other corrective actions produce inconsistent results, with the data hitting the target one month and then missing it the next. Still other well intentioned plans seem to have no effect on performance.

Consider the following scenario: During a site survey, reviewers recommend that your center adopt a grading system for solid organ injuries. Trauma program leaders agree that this is an opportunity for improvement, and they decide to implement the organ injury scale (OIS) developed by the American Association for the Surgery of Trauma. You develop a corrective action plan centered on provider education, with a goal of 90% compliance.

You roll out your corrective action plan in February. Initial compliance levels are good in March, they improve even more in April, and they hit the target in May. But then compliance dips back near the baseline in June. The numbers rebound in July but slip again in August. What’s happening?

1. Is compliance consistent across the team?

One common problem with corrective action plans is inconsistent results. Drilling down at the case level can identify individuals or groups who are not adhering to the new process or guideline. The drill-down process can also uncover other patterns of non-compliance.

In the OIS example described above, case review might uncover several issues:

If you find that one or more departments, teams or individuals are not complying with the corrective action, revise the plan (as needed) and follow up.

2. Is ownership of the corrective action clear?

Another common problem is that there is no clear ownership for the corrective action. If everyone is responsible for grading solid organs, then no one person is responsible. This can lead to inconsistency in results and failure to achieve the goal.

The solution is to revise the corrective action plan with clear and specific responsibilities. In our OIS example, the plan might need to spell out that surgeons will grade operative solid organs and radiologists will grade images. The plan might also need to specify that trauma registrars should forward any case without an OIS grade to the PI coordinator.

Many times the action plan for a PI issue is the development of a new clinical practice guideline (CPG) or the revision of an existing one. Monitoring compliance with these guidelines then becomes part of the loop closure. This is also an “ownership issue.” A CPG that was developed without the involvement of end users will likely never achieve success. Involving users in guideline development will lead to a sense of ownership and help ensure that the plan is practical for use.

3. Is the event too infrequent?

If the targeted quality or safety event occurs infrequently, it will be difficult to tell whether the corrective action is truly having an impact. A very small sample size can keep PI loops open.

One solution is to group events.

4. Do we understand which step of the action plan needs attention?

Some corrective action plans include goals that involve multiple steps. If there is a failure to achieve a goal with multiple steps, drilling down to the specifics can help.

In both examples, understanding these details is vital to revising the corrective action plan effectively.

5. Is the performance goal appropriate?

Every corrective action plan should include a well defined performance goal. This seems straightforward, but it is not always easy to set a goal that is both useful and appropriate. Here are a few considerations:

Whenever possible, use national norms or external standards to establish performance goals for corrective action plans.

For corrective action plans that involve significant change, consider setting interim goals. If current performance on a given process is 20%, boosting performance to 90% might seem an unreachable objective. Breaking the process into steps — for example, achieve 60% by September and 90% by January — will make progress more visible to team members and help maintain forward momentum.

What do you do when there is no national performance standard? Setting a goal without national standards is a bit subjective. In some cases it could come down to an individual preference, something that the trauma medical director feels strongly about.

Let’s return to the OIS corrective action plan sketched out above. In this theoretical example, the goal of 90% is chosen simply because it is an achievable threshold that represents a substantial performance improvement.

Avoid setting a goal of 100%, if possible. Any goal that requires human input or decision making is more likely to be achieved at less than 100%. Use common sense. For example, it might be reasonable that a temperature be reported within 30 minutes of arrival only 80% of the time. It is better to achieve 80% and raise the bar than to set a 100% goal and never achieve it.

However, there are “absolutes.” For instance, as a patient one would expect to receive the correct blood products 100% of the time. These are truly “never events.”

6. Have we really ensured that similar events are “less likely to occur”?

Fast forward to your trauma center’s next review. In response to comments at your previous site visit, your team has implemented OIS grading for solid organ injuries. You show the reviewers:

As a reward for your efforts, the reviewers cite your program for failure to demonstrate loop closure.

To understand what happened, let’s return to definitions. According to Resources for Optimal Care of the Injured Patient, an effective PI intervention results in “an alteration in conditions such that similar adverse events are less likely to occur.” In addition, the standards define loop closure as the assurance of safety, and they indicate that it must be “readily identifiable through methods of monitoring, reevaluation, benchmarking, and documentation.”

Loop closure is the evidence of change.

How to demonstrate that a corrective action achieved loop closure: External reviewers are typically moving quickly through large amounts of information. To demonstrate evidence of change and loop closure, keep it simple. A clearly labeled graph or chart showing a goal and a reasonable period of measurement is a great demonstration of loop closure.

Here is an example of how loop closure could be demonstrated for our OIS corrective action plan: 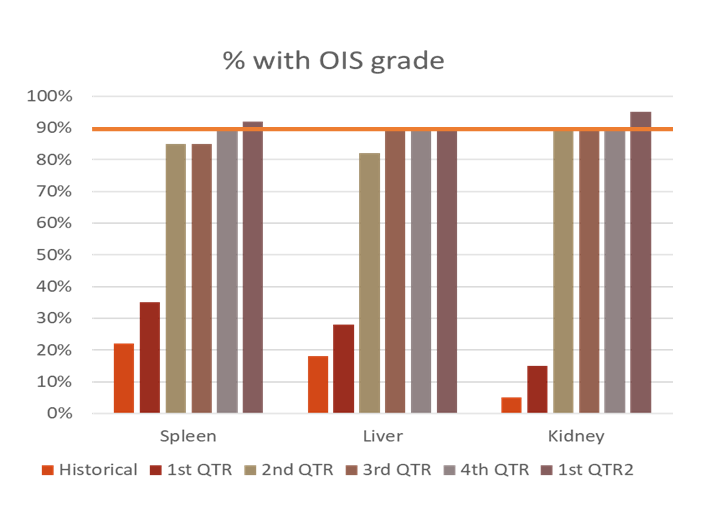 This graph demonstrates evidence of change. Compliance with grading each of the three solid organs is reviewed over 12 months, a goal of 90% compliance is clearly identified, and the results show consistent compliance over time.

Again, keep it simple. It is not necessary to break the data down by surgeon or by grade of injury. Too much information can be as ineffective as too little.

Knowing when it is OK to close

Many corrective action plans involve human behavior change, often across disciplines and departments. Human behavior change is challenging and takes time. Both the severity of an issue and its frequency within your trauma center will affect monitoring time.

An event occurring weekly may be able to be closed within two or three quarters. In contrast, an infrequent serious event such as an unanticipated mortality might need to be trended for years.

This aspect of loop closure is a bit subjective. As a trauma program manager, I would prefer that reviewers find we had monitored something longer than necessary than to be told the loop was closed too soon.

Here is one useful principle: If an issue is closed, it is critical that no occurrences of that event be found in the records examined by external reviewers. To use the OIS example, every chart that the reviewer looks at should have appropriate OIS grading.

A trauma center’s Performance Improvement and Patient Safety (PIPS) Plan should specify how and at what level of review issues can be closed. Every issue or case does not require a corrective action plan. Only those issues that were identified as needing a corrective action require evidence of success.

Finally, remember that corrective action plans can evolve over time. One reason is that national norms can and do change. PI leaders must update action plan goals accordingly.

Another reason is that corrective action plans should reflect the maturity and continuing development of the trauma program. A new trauma center may track the use of OIS scoring, while a mature trauma program could evolve to tracking the correct assignment of OIS grade — for example, comparing pre-operative to post-operative grades of injury.

Loop closure is an ongoing challenge for many trauma centers. Effective loop closure demonstrates the evidence of change. For trauma PI leaders, the keys are gaining a clear understanding of the concept of loop closure, establishing realistic goals, trending over time, reviewing data for patterns, and revising corrective action plans as needed to achieve performance targets.

How trauma centers are responding to the increase of violence in the U.S.