The ACS Committee on Trauma requires all verified trauma centers to use a risk-adjusted benchmarking system to assess patient outcomes (CD 15–5). In addition, benchmarking is a required element of trauma PI loop closure (CD 16–2).

This article was developed by Trauma System News in cooperation with our advertiser, Pomphrey Consulting.

In my experience, the word “benchmarking” drives fear into many a heart. However, benchmarking is simply a process in which you evaluate something by comparing it with a standard.

The ACS Trauma Quality Improvement Program (TQIP) provides one opportunity for participating trauma centers to benchmark their performance against national standards. However, there are other ways to benchmark patient outcomes.

In this article, I explain how to benchmark trauma center outcomes using M and Z scores (also known as M and Z statistics). Even if your hospital is a TQIP center, M and Z scores can be very useful. They provide another tool for identifying poor outcomes and improving trauma care.

The first step is to determine your trauma center’s M score. The M score tells you whether your case mix of patients is similar to a national comparison group. If your case mix is similar, you can make a valid comparison. If it isn’t, you can’t.

The national comparison group is the group of trauma patients that make up the Major Trauma Outcome Study (MTOS). The MTOS has its drawbacks (mainly the age of the study), but it does provide a very large benchmark group for comparing trauma patient outcomes — more than 80,000 trauma patients treated at 139 hospitals in North America.

There are four steps to calculating the M score:

1. Determine what fraction of your patients fall into each of six probability of survival (Ps) increments. Here is a theoretical example of a trauma center’s patient mix grouped by survival probability: 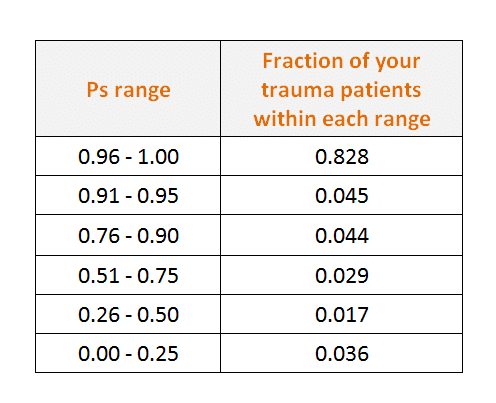 2. Compare those fractions to the corresponding fractions of the MTOS group. Here is the same scenario, with the addition of MTOS patient mix fractions: 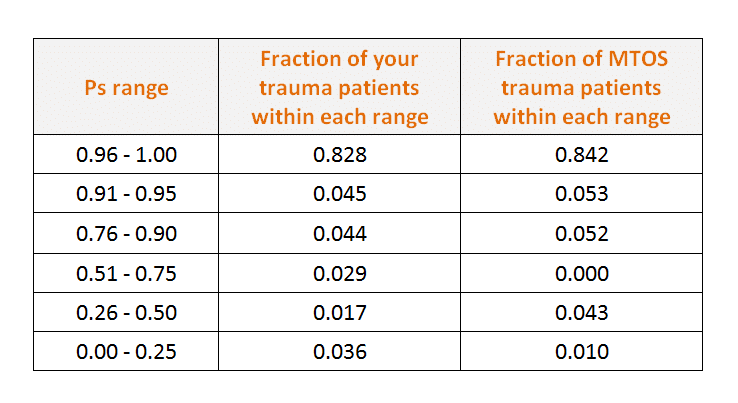 3. Quantify the difference between the two fraction sets (the M Score) using the following formula:

Using the values in the scenario above, the formula is:

4. Determine whether your patient mix is “similar” or “dissimilar” to the MTOS group.

In general, the closer your trauma center’s M score is to 1.0, the more your patient population is a “match” to the MTOS study group. Specifically:

In the theoretical example above, the M score is 0.944, representing an excellent “match” between the trauma center’s patient group and the MTOS study group. The hospital’s trauma patient population is statistically similar to the MTOS benchmark population.

If your hospital’s M score is similar to the MTOS benchmark, the next step is to calculate your Z score.

The good news is that most trauma registry software packages can produce a Z statistic report. The only thing trauma leaders need to do is understand how their software performs this calculation. There are two possibilities:

To recap, the Z score can be calculated based on either deaths of survivals. The sign (+ or -) of Z changes, but the absolute value does not.

If your trauma center’s Z score indicates significantly worse outcomes, address the problem in your performance improvement and patient safety (PIPS) process. Review unexpected outcomes to identify any individual or system-wide failures and develop recommendations for future management or guideline revisions. The Z score itself will provide a sound benchmarking method, thus closing the loop for your PIPS committee.

What do you do if your M score is dissimilar to the MTOS group?

If the severity of your patient group does not match the MTOS group, you cannot use MTOS benchmarks to evaluate your trauma center’s performance. However, there are other options.

In the next article from Pomphrey Consulting, I will explain how to use W scores as a versatile tool for benchmarking trauma center performance.

Do you have more questions about trauma scores? Pomphrey Consulting is hosting free “Ask an Expert” webinars every Thursday in May 2020. Our team of experts will be on hand to answer your questions on any trauma registry topic. To reserve your spot at the next session, visit Trauma Registry Q&A May 21.

Trauma Registry Q&A: “Can we stop collecting data elements that have been dropped by the NTDS?”